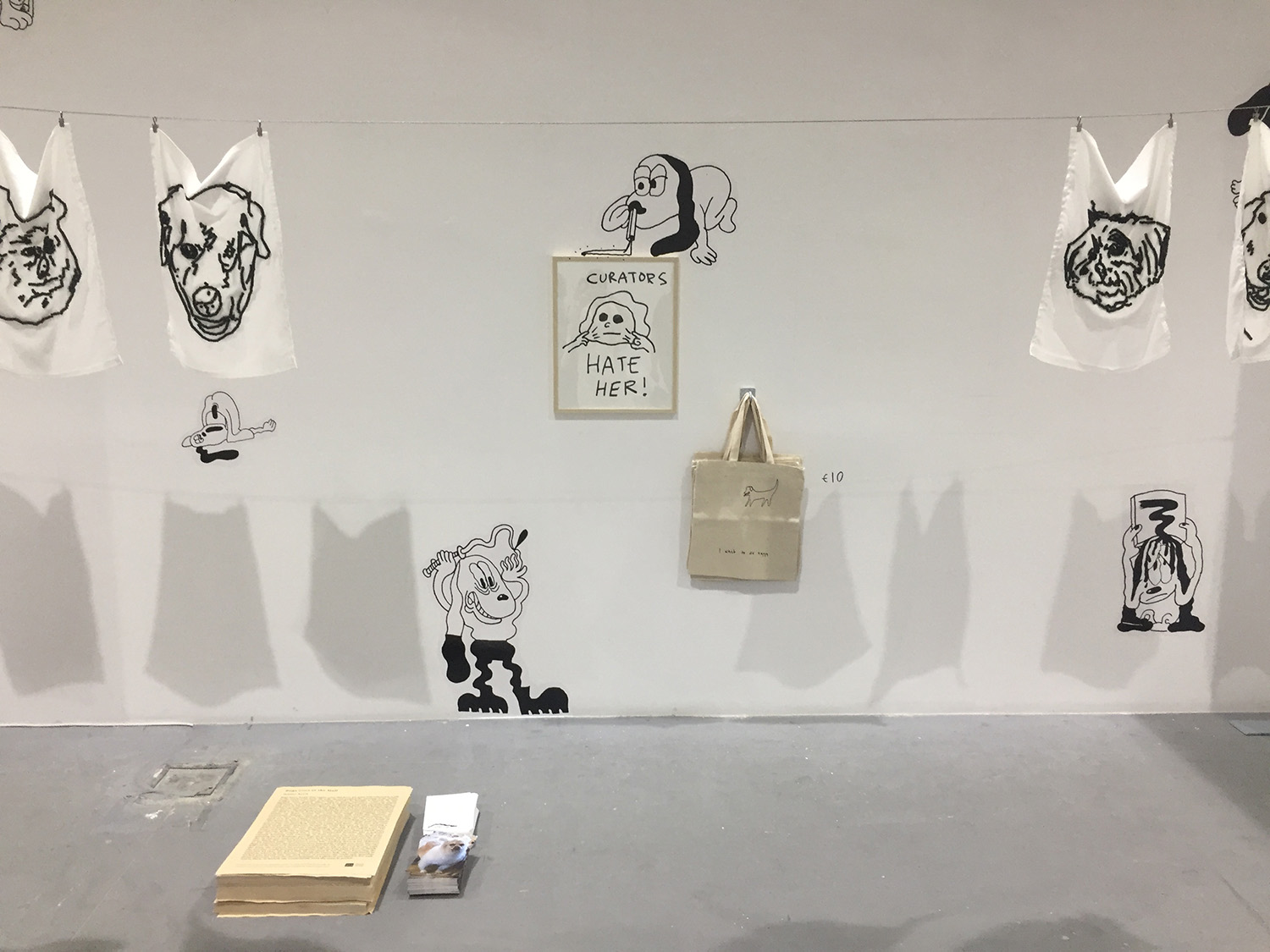 Only Dog Can Judge Me

Dogs are man’s best friend but Man doesn’t exist (at least not anymore, but probably never) so let’s agree here and now to make the logical induction that dogs are everyone’s best friend, and one of the only good things left in a world on fire. Ours is a generation that has dogs, small rental apartments and depression: one that thirsts for change but is perennially paralyzed by what we’ve inherited. But a generation isn’t a real thing either. It’s only a slice of time that we all, through happenstance, happen to share, to be entangled in together. Dogs are a salve though. Just to conjure one in mind. Just to smell the top of her head. Maybe we can make it after all.

Only Dog Can Judge Me is an exhibition of drawing, beading and text work by Kablusiak and Walter Scott, presented at Platforms Project in Athens, Greece, by AKA artist-run and Untitled Art Society.

Jade Nasogaluak Carpenter (Kablusiak) is an Inuvialuk artist and curator based in Calgary and Banff, born in Yellowknife and raised in Edmonton. She currently holds the Indigenous Curatorial Research Practicum at Banff Centre for Arts and Creativity and received a Bachelor in Fine Arts from the Alberta College of Art and Design. They use art and humour as coping mechanisms to subtly address cultural displacement, and to openly address mental illness; the lighthearted nature of her practice extends gestures of empathy and solidarity. These interests invite a reconsideration of the perceptions of contemporary Indigeneity and counter the stigmatism surrounding mental health. Kablusiak is a core member of Ociciwan Contemporary Art Collective. Her drawings were featured in the Summer 2017 Issue of Inuit Art Quarterly.

Walter Scott is a Kahnawake-born interdisciplinary artist working across writing, video, performance and sculpture. In 2011, while living in Montréal, he began the comic book series Wendy, exploring the narrative of a fictional young woman living in an urban centre who aspires to global success and art stardom but whose dreams are perpetually derailed. 'Wendy' has been featured in Modern Painters, Canadian Art, Mousse Magazine, Art in America, and The New Yorker. Recent Exhibitions include the 2016 Montreal Biennale, Le Grand Balcon, Musée d'art contemporain; Big Toe, Giant Steps at Occidental Temporary, Paris; and Ambivalent Pleasures: Vancouver Special, Vancouver Art Gallery.