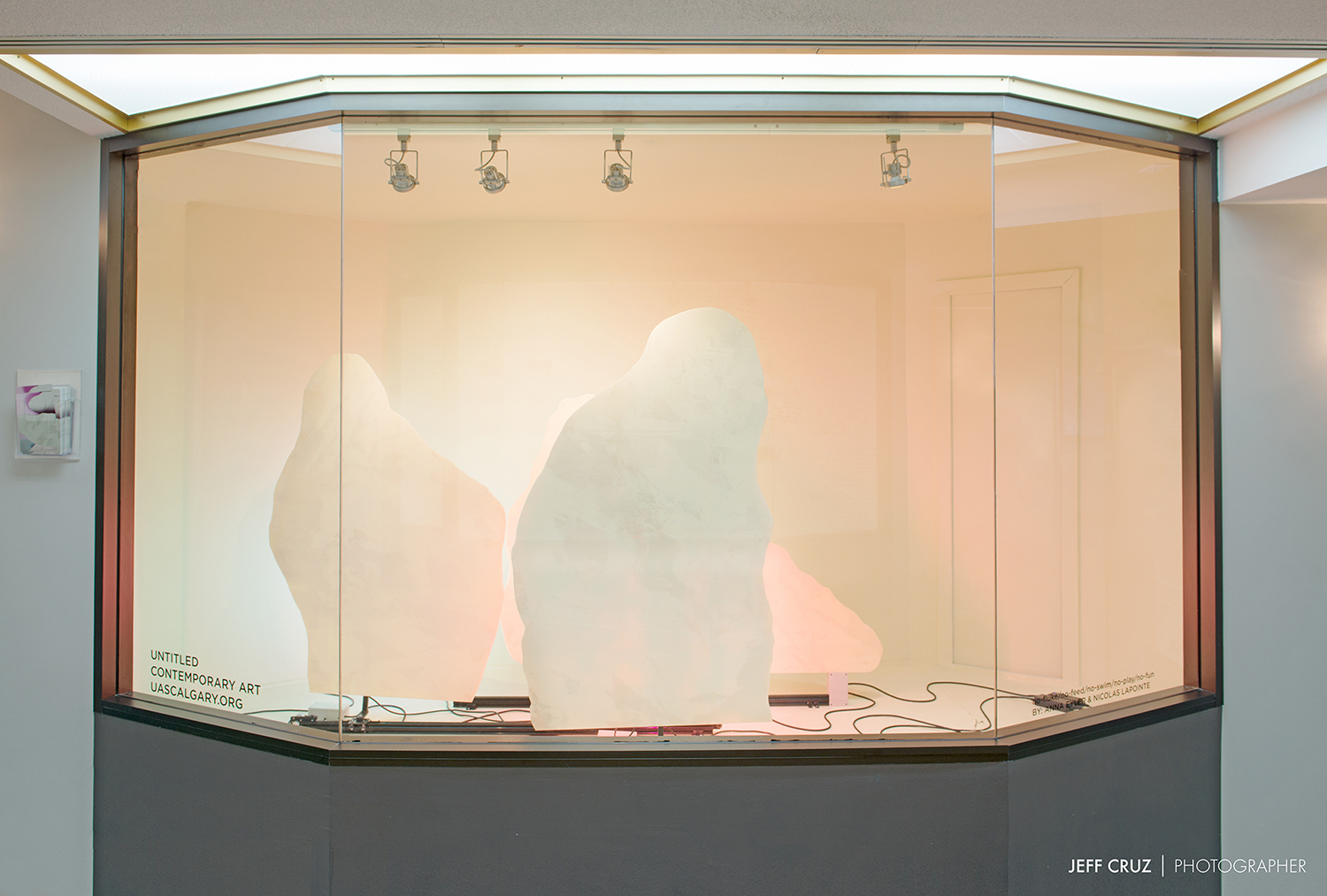 Referencing kinetic department store window displays, no-fluke/no-feed/no-swim/no-play/no-fun employs the materials and techniques of advertising to reflect on the role of technology in contemporary culture. The artists take an ambivalent position on reality, behaving a bit like amateur archaeologists from an imagined future.

In both form and symbolism, no-fluke/no-feed/no-swim/no-play/no-fun draws on Mannerist painter Jacopo Pontormo’s famous altarpiece, The Deposition from the Cross (1528). Renowned for its bright colours and flat composition, Pontormo’s painting veered away from naturalistic representation, employing instead aesthetic strategies to heighten the emotional and religious content of the scene. Likewise, no-fluke/no-feed/no-swim/no-play/no-fun uses the form, palette, and two-dimensionality of the altarpiece to evoke ideas of the mystical. Rather than adhering to a Christian narrative, however, this work questions the relationship between spirituality and technology in a contemporary context.

As the positions of the rocks change from moment to moment¬—while also varying in speed¬—they provide a tangible sense of the passage of time. Their movement also recalls the shifting of tectonic plates, thereby conflating day-to-day change with a geological sense of time. In so doing, no-fluke/no-feed/no-swim/no-play/no-fun reflects upon our impact on the Earth’s geology and ecosystems, offering a poignant yet critical reflection on obsolescence and our material legacy.

Anna Eyler is a multidisciplinary artist based in Montréal, Québec. Working in performance, new media, and installation, Eyler investigates new forms of subjecthood emerging in our increasingly technologized world. Eyler holds a BA in Religious Studies and Art History from Carleton University (2010) and a BFA from the University of Ottawa (2015). Recent awards include the Sparkbox Residency Award (2016) and the Joseph-Armand Bombardier Canada Graduate Scholarship. Her work will be included in the upcoming FILE: Electronic Language International Festival in Sao Paolo, Brazil (2017).

Working in sculpture, new media, and performance, Nicolas Lapointe prefigures hybrid structures situated between the physical and the virtual. Material objects recall digital processes, while virtual structures replicate tangible forms. Objects linger in virtual nonspace, transmitting messages from the void. Lapointe’s structures push the boundaries of sentience, functioning both as inquiries into the absurd and explorations of the poetics of motion.

Eyler and Lapointe maintain a collaborative art practice that touches on concerns of Minimalism, materiality, and technology. Their work was recently featured in the exhibition beyond différance, and now, at Ace Art Inc. in Winnipeg, Manitoba (2016)