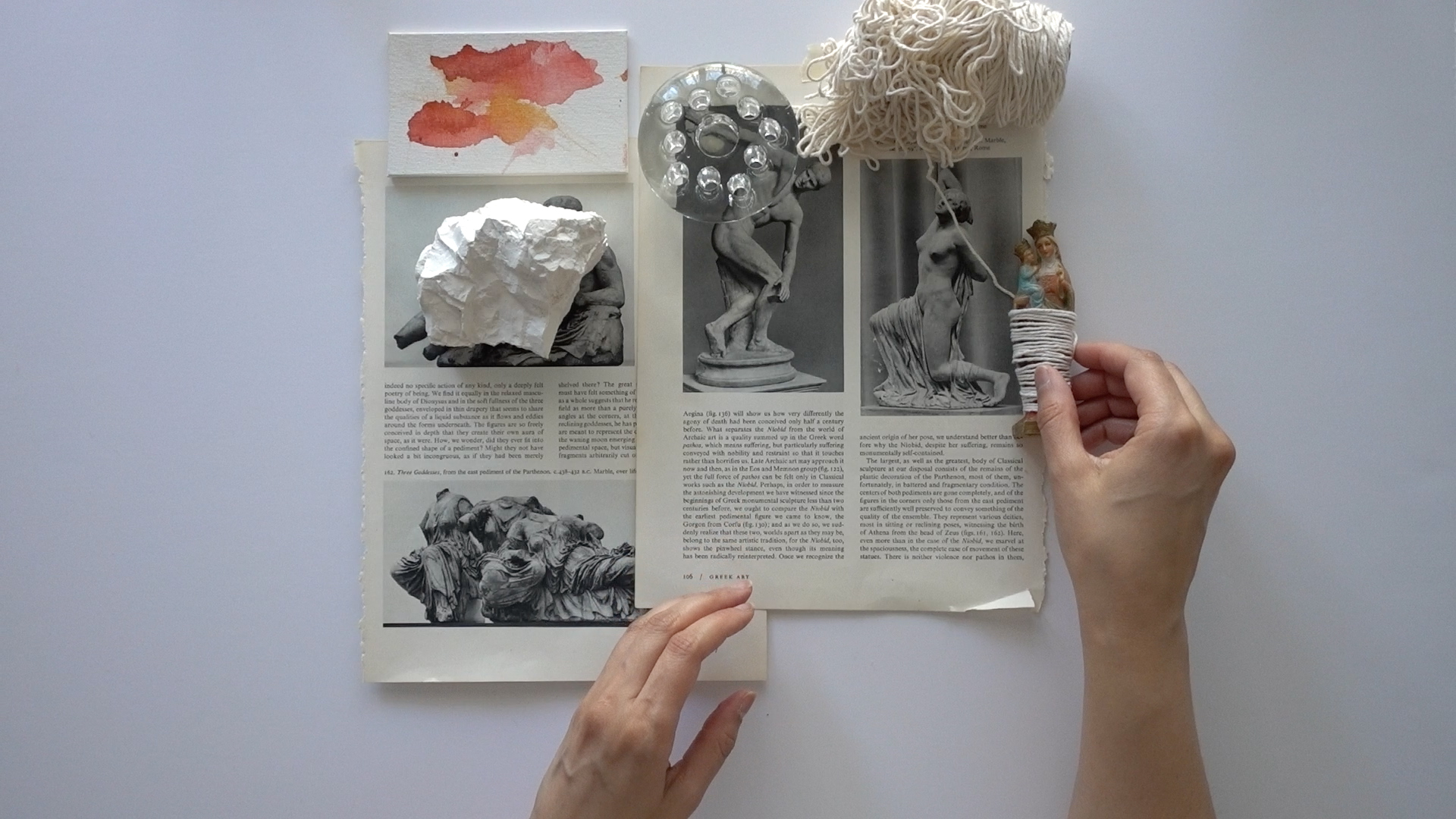 What lessons do we find in knowing and doing? What knowledges do movement, practice, play, embodiment, and the cycles, systems, histories, and economies of artistic work open us to? In this exhibition, works by Helah Cooper, Erika DeFreitas, and Susan Jahoda and Caroline Woolard of BFAMFAPhD exist between modes of practice, play, embodiment, sensing, and pedagogy, recoupling knowing and doing. Assembling projects that both predate and arise from the context of COVID-19—a force that restructures our modes of relation, encounter, activity, and gathering—the exhibition traverses diagrammatic, participatory, sculptural, and moving-image practices in order to refocus attention on the lessons carried in embodied practice.

The exhibition at The Bows is animated by online talks and workshops, including visiting artist lectures by Helah Cooper and Erika DeFreitas in AUArts studio art courses taught by Alana Bartol and Sarah Nordean, and an open public workshop by Susan Jahoda and Caroline Woolard on April 10, 2021.

Biographies
Alison Cooley is a writer, curator, and educator. She is a settler raised in Saskatoon, Saskatchewan on Treaty 6 Territory, currently living and working in Toronto and Mississauga. Her work often focuses on exploring queer, feminist, and decolonial intersections of natural history and visual culture, and addressing performativity, play, pedagogy, and embodiment in artistic practice towards social justice. She has previously held positions at the Royal Ontario Museum, Gallery TPW, Canadian Art, and FUSE magazine. Previous curatorial projects have appeared at Gallery TPW, Bunker2, YTB Gallery, and the Blackwood Gallery, where she holds the position of Assistant Curator. Her writing has appeared in the Blackwood’s Society for the Diffusion of Useful Knowledge broadsheet, Canadian Art, C Magazine, Blackflash, FUSE, and The Journal of Curatorial Studies, among other publications.

Helah Cooper is an artist and craftsperson based in Mi’kma’ki (Lunenburg, Nova Scotia.). She is a graduate of NSCAD University and the Heritage Carpentry program at the Nova Scotia Community College, and currently works as a carpenter while maintaining a slow-paced, but active art practice. Helah’s work is process-oriented and often collaborative. She creates playful mechanisms for performance and non-verbal communication in order to cultivate sensory attunement, queer narratives and intimate links between objects and people.

Erika DeFreitas is a Scarborough-based artist whose practice includes the use of performance, photography, video, installation, textiles, works on paper, and writing. Placing an emphasis on process, gesture, the body, documentation, and paranormal phenomena, she works through attempts to understand concepts of loss, post-memory, inheritance, and objecthood. DeFreitas’ work has been exhibited nationally and internationally. She was the recipient of the TFVA 2016 Finalist Artist Prize, the 2016 John Hartman Award, and longlisted for the 2017 Sobey Art Award. DeFreitas holds a Master of Visual Studies from the University of Toronto. She is represented by Angell Gallery in Toronto, Canada.

BFAMFAPhD is a collective that formed in 2012 to make art, reports, and teaching tools to advocate for cultural equity in the United States. The work of the collective is to bring people together to analyze and reimagine relationships of power in the arts.

Susan Jahoda is Professor of Art at the University of Massachusetts, Amherst. Jahoda is an artist, educator, and organizer whose work includes video, photography, text, performance, installation and research-based collaborative projects. Works have been produced for venues in London, Paris, Basel, New York, Seoul, and Moscow. Jahoda is a core member of BFAMFAPhD and the Pedagogy Group, collectives of socially engaged artists and educators based in New York City.

Caroline Woolard is Assistant Professor of Sculpture at the University of Hartford, Connecticut and employs sculpture, immersive installation, and online networks to imagine and enact systems of mutual aid and collaboration. Her work has been featured twice on New York Close Up (2014, 2016), a digital film series produced by Art21 and broadcast on PBS. Woolard is the 2018–20 inaugural Walentas Fellow at Moore College of Art and Design and her work has been commissioned by and exhibited in major national and international museums, including at MoMA, the Whitney Museum, and Creative Time. Woolard is a core member of BFAMFAPhD.