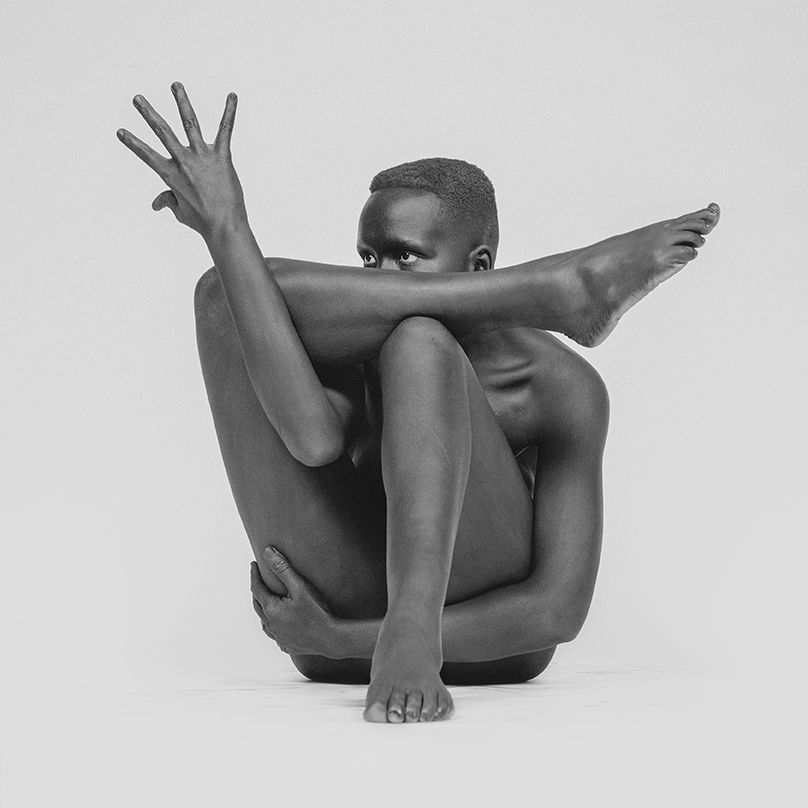 Gnoul: A Benefit Exhibition for the Family of Latjor Tuel

The exhibition will be on view until Saturday, July 9.

The Bows’ masking policy remains in place. We kindly ask that visitors remain masked the entire time they are in the gallery, including during the opening reception. Anyone in need of a mask will be provided one.

Gnoul is a collaboration between photographer Michèle Bygodt, model Nyalinglat Latjor, and bodypainter and makeup artist Iki Lee. The photographic series, whose title comes from the word for body in the Fang language of Gabon, is the result of a collective choreography between the three artists. In dialogue with historical representations of Blackness, as well as visual art and the larger culture’s recent interest in “the Black body”—a formulation that Bygodt calls to scrutiny—Gnoul is a celebration of mutually-supported agency, crystalized in the portraits’ depicted figure.

This exhibition is a fundraiser for the family of Latjor Tuel, a father, uncle, brother, and son who was shot and killed by Calgary Police Service while in mental distress on February 19, 2022.

This series of six photographs is an edition of 3. Photographs may be purchased individually for $300. Photographs come professionally framed and will be available for pickup from The Bows after the exhibition’s closing date, no later than the end of July.

For purchase inquiries, please ask during the fundraiser event or during normal gallery hours, or email info@thebows.org.

All donations of $25 or more will also be issued a charitable donation tax receipt. (For online donations, please mark your donation “general” and write “For Latjor Tuel” in the message line. Also include your mailing address if you’d like to receive a postcard.)

80% of proceeds from art sales and 100% of donations will go directly to the family of Latjor Tuel. The remaining 20% will be divided between the artists.

Born in Libreville, Gabon, Michèle Bygodt’s interest in photography began as a teenager when her father’s work led her to live in five different countries, in both Africa and Europe.  Living in a multicultural environment and later moving from one country to another ignited her interest in travel photography, cultural diversity, differences, and similarities. She graduated with a BA in graphic design and sciences in Paris before moving to Vancouver in 2016 to pursue photography.  After attending Emily Carr University of Art+Design, she graduated with a BFA in 2019. During her studies she was also a nominee for the 2018 Lind Prize.

Her work has recently appeared in the exhibition Sankofa at the Museum of Anthropology at the University of British Columbia and at the Telephone Gallery at Macaulay & Co. Fine Art, both in Vancouver in 2021.

Nyalinglat Latjor is a model, activist, and refugee based in Vancouver. She is represented by Alaeria Agency. On Feb 19, 2022, she lost her father Latjor Kuony Tuel to a police shooting.

Iki Lee is a Vancouver-based bodypainter and professional makeup artist who graduated from Canada's #1 makeup institute, Blanche Macdonald Centre. Her work has appeared at Vancouver Fashion Week, South Asian Fashion Week, African Fashion, and Arts Movement, as well as in fashion magazines and art galleries worldwide, including the Museum of Anthropology at UBC, Malvie France, and Ain't Bad.

Originally from Hong Kong, Iki was an advertising designer who specialized in graphics and was a freelance photographer for product shoots. With her studio and fine art background, Iki fell in love with bodypainting and loves using the human body as a canvas to create a dynamic piece without the constraints of a traditional medium. Her true passion is using makeup to tell a story and to design a character.

With ReIssue, we commissioned an essay by local writer Sue-Shane Tsomondo to accompany the exhibition.

On visibility and the experience of Blackness: A reflection on Gnoul

. . . The collaboration between photographer Michèle Bygodt, model Nyalingat Latjor, and bodypainter and makeup artist Iki Lee in Gnoul is a witnessing of the prevailing views of what it means and what it looks like to be Black. In this work, Latjor is a contortionist, posing in uncomfortable positions and staring daringly into the camera lens, accentuating the performance of Blackness by performing it as strange and foreign. This is a representation of Blackness that has existed for centuries: in his novella The Heart of Darkness, Joseph Conrad describes African “natives” as “savage and superb, wild-eyed and magnificent.” Gnoul is a witnessing of what it means to be feared, desired, and deliberately misunderstood. I can recognize these photographs as representations of Blackness, despite knowing that being Black is far more complex—that we are more terrified than we are terrifying. The self-recognition that takes place when I look at these photos takes place through the lens of the white gaze and the lens of my own Blackness. That dual witnessing is the ultimate experience of Blackness for me. . . .

Read the full essay at ReIssue.pub

This fundraiser was made possible by the generous sponsorship and collegiality of Norberg Hall Fine Frames, ReIssue, Resolve Photo, The Printing House, and Katy Whitt Photography