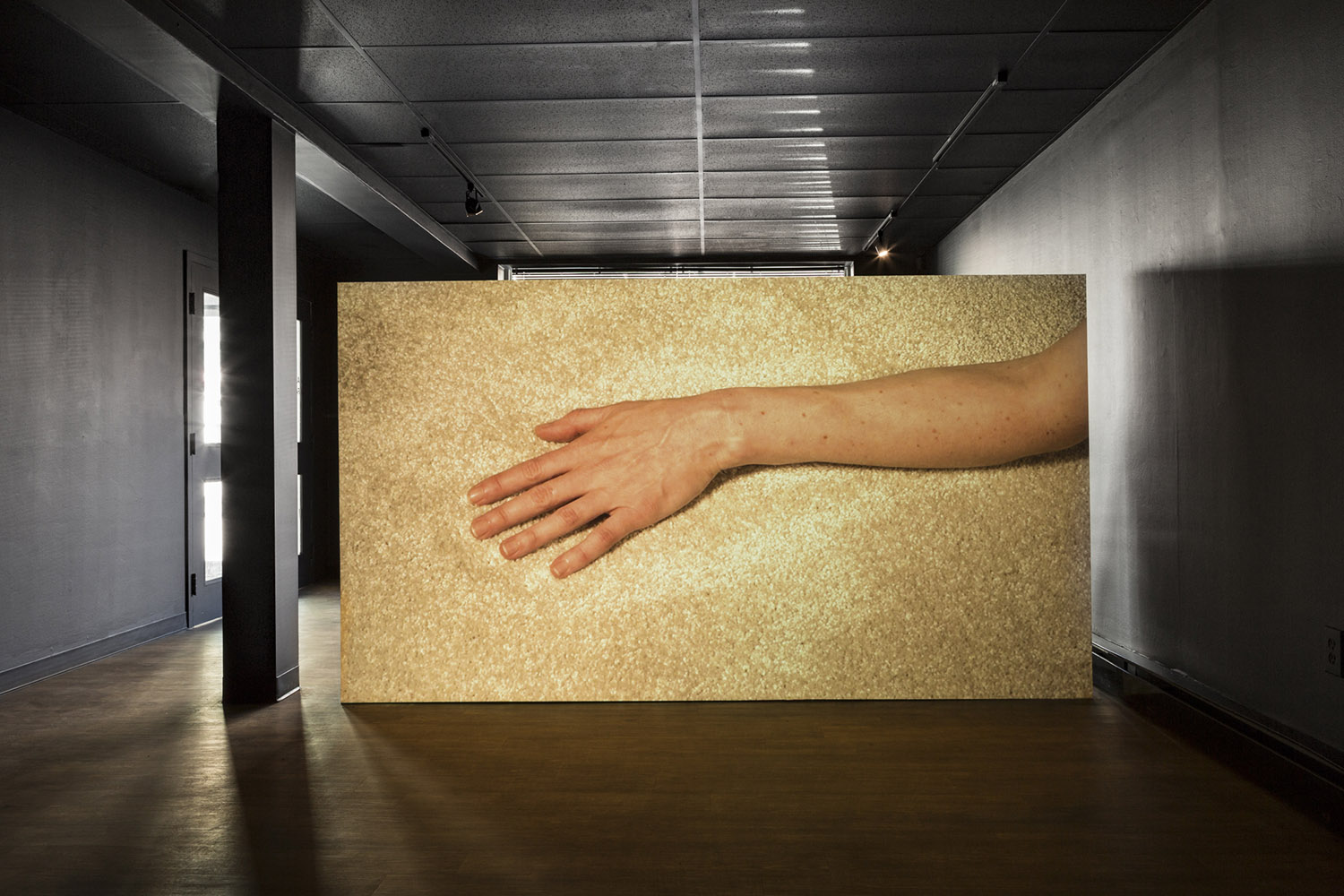 A bridesmaid in a flowing silk dress descends a set of steps, misses her footing and takes a spill. And this too shall become content.

Anna Hawkins’s most recent project Fall Fell Felt dissects, remixes and re-enacts the popular online genre “girl fails” in an exploration of schadenfreude, voyeurism and empathy. A fraught but incredibly popular genre, “girl fails” encompasses online video compilations of women in various states of accidental or self-inflicted peril—unsuccessfully backflipping off a trampoline, falling over a slippery banister, tumbling out of a complex yoga pose. These fails are wince material arranged and cut in a succession of bite-size clips hurtling forward into the void of an internet black hole (or “content hole”), where time is elasticized. Content is a portal that consumes hours hungrily, and scrolling is the vehicle that drives it vertically—a slow and prescribed form of free-falling.

Combining found and original video fragments, Hawkins’s video installation interrupts the typical rhythm of fail videos, stratifying their parts using a masking technique that isolates figures or maintains only a cutout of their bodies. In some cases, the fail moment has been incised and we see only the aftermath. Alternately, videos are pared down to their most basic elements: a gasp, the rev of an engine, or a disembodied leg in space. By staging slow and pliant re-enactments of the bodies on-screen with her own body, Hawkins demonstrates a groundlessness, situating herself in weightless limbo between subject and spectator. Her body leaves an impression in medium-pile taupe carpet, mimicking the shape of her found-footage counterpart, indicating an empathetic channel between subjects who feel pain. In popular media, women have historically been the ciphers onto which chaotic emotions are cast—from ecstatic pleasure, to fear, to abject suffering. Does this witnessing defer our own ugly experiences, or provide a safe form of falling? 'Fall Fell Felt' obstructs the tradition of placing women’s bodies at the centre of violence and desire to be consumed from an objective distance, as Hawkins seems to gently break her subjects’ falls over and over again. Rather than written off as sheer spectacle, the gut-wrench moment is posited as a site of empathetic physical interconnection, the falling felt deeply.

Anna Hawkins is a Montreal-based artist who works primarily in video. Her work is concerned with the ways in which images, gestures, and information are transmitted, transformed, and experienced online. Group exhibitions and screenings include those at the UCLA New Wight Biennial (Los Angeles), X+1 at the Musée d’art Contemporain (Montreal), the WRO Media Art Biennale (Wrocław), and The Laocoön Dilemma at Galerie Sturm (Nürnberg). She has had solo exhibitions at Artspace (Peterborough, 2015), Centre Clark (Montreal, 2016) and Eastern Edge Gallery (St. John’s, 2016).