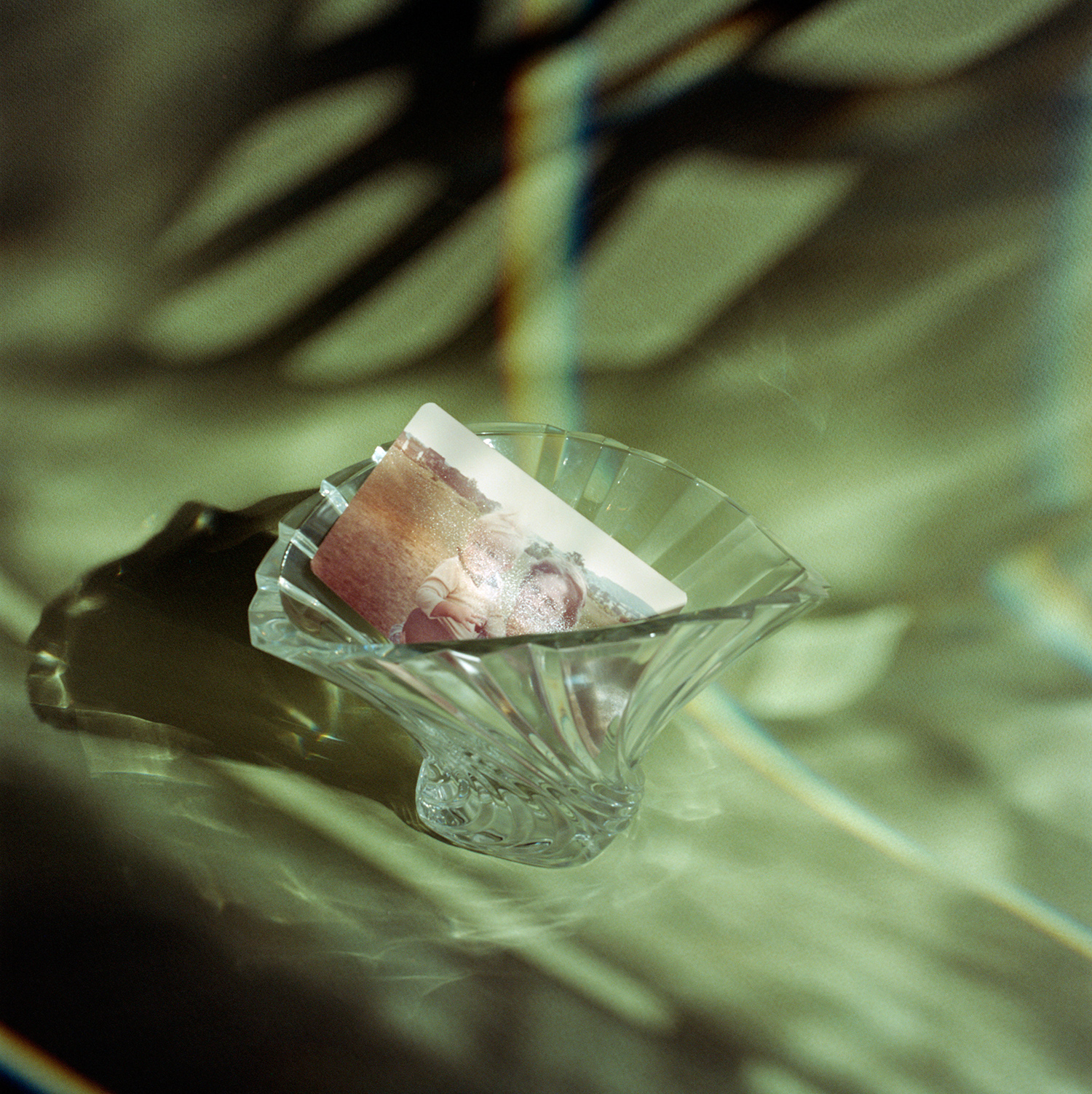 an echo, a shadow

‍Not to remind myself, but to oppose the laceration of forgetting as it reveals its absolute nature. The—prompt—“no traces remaining,” anywhere, in anyone.

After the death of his mother, Roland Barthes set out to write his treatise on photography, Camera Lucida, in which he arrived at an enigma of photography: that it is “powerless to say what is obvious.”

In the body of work that makes up an echo, a shadow, Brittany Nickerson explores her family’s photographic archive after her grandmother’s passing. Nickerson’s interventions into this collection catalyze her griefwork as a kind of carework. In searching for and depicting absences—the archive’s omissions—she intimates the archive’s hidden subjects, and its unspoken subjectivities.‍‍

‍an echo, a shadow proceeds from a counter-archival impulse. Instead of endeavouring to reveal absolute truths, Nickerson’s practice pursues traces of the collection’s blind spots through Queer gestures of care and sentimentality. Her collage practice initiates an ethics of custodianship as her interventions into her family photos place pressure on the role of the vernacular archivist as silent caretaker, while also taking care to honour that work. It also honours her grandmother, who primarily performed this work, and whose life is largely imprinted on the archive as a shadow.

‍Brittany Nickerson (she/they) is a Queer visual artist and cultural worker currently living and working in Mohkinstsis, which is colonially known as Calgary. She was born on the traditional unceded territory of the Wәlastәkewiyik (Maliseet) people.

Her lens-based research and practice use autoethnography to examine patriarchal structures of archiving. Through a Queer perspective, Brittany aims to disrupt and reconfigure historical narratives in her family’s archive.

In 2014 Brittany graduated from the Alberta University of the Arts with a Bachelor in Design. She completed a Master of Fine Arts from Emily Carr University in 2017. Since 2017, she has been a full-time cultural worker in Mohkinstsis.

Artist’s Talk, hosted by the Nickle Galleries at University of Calgary

A response to an echo, a shadow by May G N

Sometime in 2013, I looked beyond a curtain made of cyan and thought that this must be what memory feels like. It was humid, I think, in the gallery space, and almost entirely empty. It was almost certainly very dark, and I am uncertain about much else. At the time, I knew I was inside something that was outside of everything else (and in that way it was extraordinary). But I can never be sure what that thing really was. I can only look back, try to make sense of it, and wonder. That kind of ambiguousness is a current throughout this text, just as it is with an echo, a shadow.

We can sort through it, though, and so I will try and do that here. What follows are some short fragments of memory to act as a companion for thinking through this exhibition. These next segments are at least partially fabricated in some instances, and definitely inaccurate in others. They may be subject to embellishment. Please believe that this is the best I can do with what I have.  After all, that’s how these things work. It’s why we’re here looking at this right now.

I am sitting across from a man in my studio. He is tall and gentle and quiet. If I remember correctly, I am probably bushy and hunched. I look wild, and the circles under my eyes are dark. I have an unkempt beard and I wear a hoodie most every day, and I imagine I was aware of the stark contrast between our bodies, but maybe not. My uncle passed recently (that day?) and I have never met this man before, but I talk to him about it all the same. My uncle, I think, was a man who had tried. I remember almost nothing about him now, but I do remember the man in glasses.

I wonder sometimes if it was awkward for him, or if he remembers that day or even thinks about me at all anymore. The lights in the studio might have been too bright for me, or maybe it was him, but I remember rubbing my eyes till they were reddened. I want to believe that I was glad he was there.

After that, we would go for coffee every once in a while, but those moments don’t come to mind nearly as easily. They exist beyond the surety of the memories we have let harden and become foundational. My mind is cluttered with memories like these, that seem superfluous and almost too scattered to hold real meaning. And yet they come to mind, here. I’m not sure what I wanted to see him about, or why it was always over coffee and not any other equally innocuous activity. I probably wanted advice on what to do or how to do it. I wanted to be a writer then, and an artist, and I was starting to think I might also be a woman. He was two out of three of those things, so maybe it was a matter of practical solicitation on my part. But I can’t help it. I think about that day before, if it was awkward for him, and if he remembers anything about it. The moments we spent over coffee then become crystallized.

I could look up the exact date and time by way of the online obituary, but it wouldn’t do much good. What matters is that when I was young, playing on a club football team, I knew this boy.

Of course, there’s only so much you can bother knowing about others when you’re that young, and I doubt that I could understand what might be worth knowing in the first place. But we knew each other, as well as young kids forced to run laps and hit bags could, which has to be enough. In my head, this boy was tall and strong and admirable. He was probably just a kid, like me, but we laughed so much together that it makes him tower in memory. His hair was a rusted red and it would matte to his face underneath our helmets and obscure his freckles. It would steam in the winter months at the end of season when the practices and games were much fiercer—if only so we could stay warm.

This time, I just want to pry into what remains. I want to feverishly pull together more concrete moments but I don’t even know where to start because there is not much more I can summon up. I’ve told you all I know. He died young as a result of an accident and he left my mind for many years.

Far too recently, I was sitting in a Zoom call with a psychiatrist I didn’t know. This meeting is just one of the many requirements for referral to secure gender confirming surgery in Montreal, and so I was being asked many invasive questions. Did you spend more time playing with girls than boys? Did you always sit when you went to the bathroom? How did men make you feel? Did you have any romantic relationships with people of your assigned gender growing up? When did you tell your parents? Just how many of your memories involve crying in front of acquaintances?

For one of our first dates, I remember meeting them to go on a short walk through the river valley near East Village. The area was recently renovated and it was strange, concrete, and a little crowded. I often assert that they wore a certain dress that day, but they say that it was way too cold and it was unlikely they’d have made that mistake. I defer to them because the memory works fine either way. I can’t remember if I offered to hold their hand while they balanced on still-frozen river banks. It actually isn’t even clear to me if that date happened just so, or if it was another tableau entirely.

What I can remember is pushing them up into a tree in that same dress around a year later. I remember that they had clambered up several other gnarled old poplars before, unaided and brash like a kid. This time, they wound up getting snagged on a wayward and empty twig, managing to gouge a hole in the dress right up near their thigh. They asked for help and so I held out my hands, caught them as they leapt, and dusted them off. There was nothing to be upset about here and we kept going until another tree, just as enticing and twisted as the last, caught their eye. They run ahead through dead leaves and begin to climb.‍

May G N is a trans Artist, Writer, and Educator that has been operating across Alberta since 2015. Working across mediums of collage, digital art, and painting, she makes use of salvaged images and digital manipulation techniques to produce art addressing white transness and the things that made her what she is now.

As an Educator, May has worked with multiple organizations in the greater Mohkinstsis area, providing interpretive programming and educational workshop experiences for adults and youth. As a writer, she has written for artist-runs and magazines, and writes personal journals that can be read here. May continues to grow her experience with a focus on Arts Education as a foundation for the building of resilience capacities, community, and critical thinking in young artists.

We are holding a closing reception for Brittany Nickerson, an echo, a shadow on Friday, March 25, from 6 – 9 PM.

Our reception coincides with the opening receptions for TRUCK Gallery’s exhibition Jae Sterling, Seven Portals and EMMEDIA’s Particle + Wave Festival. As part of Particle + Wave, The Bows is also hosting "Time Well Wasted: Sketches on Hypnosis" by Lyndon Navalta in our sidewalk facing windows, organized by Quickdraw Animation Society. All of this will occur at the building our four organizations share, on 10 Ave and 19 St SW.
‍
For the reception, our masking policy remains in place and we are limiting visitors to our fairly cramped gallery to eight people at a time. We are looking forward to spring weather and anticipate that people will find natural gathering spots outdoors, with so much going on in and around the building.

Our thanks to Resolve Photo for their generous in-kind contribution to this exhibition.